Back to previous page Your location:

Associated MGT owners: Stock MGT axle carriers have the same geometry as stock Traxxas T/E-Maxx carriers. The only differences between the two are in the thread size of the setscrews and the spacing between the bearings. This package takes care of those differences and allows Associated MGT owners to run RPM T/E-Maxx Oversized Bearing Carriers (#80031, #80032, #80035, & #80038) on their trucks. The small spacer is used between the two bearings in the axle carrier and the new RPM setscrews replace the stock MGT versions.

Customers who bought this also bought… 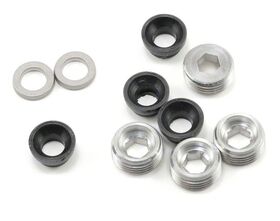 Others viewed also these products

Your shopping cart is empty

All products that are listed as in stock are in our own stock and ready to ship the next day. Exceptions to this are preorders and possible errors in logistics. All products include the finnish VAT (24%).We keep the right to change our prices.

All products are delivered by Itella (Finnish post), for EU orders priority shipments are used.

Canceling of a order

We are proud to have satisfied customers and accept returns of NEW and UNUSED items that are returned within 14days. Please be in contact with us through info@eurorc.com to recieve instructions.

When we recieve the product and it is in a reselable condition we will refund the money deducting all costs associated with the transaction.