Back to previous page Your location: 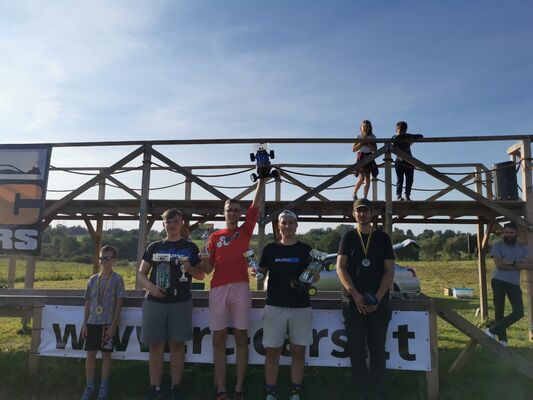 Lithuania Nationals Rd. 4. What a race it was! Day pasted, still can not believe how amazingly we fought for podium places.

In 1/8 e-buggy I was able to take a TQ, but by a margins of a second. In A1 first three of us where driving not more in than in a two seconds. I managed to pull away a bit, but I was driving on the limit and Tadas in 2nd place caught me after I did a small mistake, we were fighting until the end of the final, but as I was driving aggressively I didn’t manage my battery life and I run short of power and finished 2nd. In A2 I was in the lead and never let it to anyone else, but 8 out of 10 minutes, I was fighting with Domantas, he was super fast, but I managed to defend and take the A2 final. In A3 I missed the starting tone, didn’t hear it, so I was already 3rd, but I was in 1.5s gap to the lead. Tadas made a small mistake and I took 2nd place. Was fighting with Domantas, he made a small mistake and I took the lead, but we were fighting even closer than in A2 final, but somehow I managed to make my car super wide and defended my place and finished in 1st place which meant that I took the win in the class.

In 1/10 4wd class in qualifying runs I was driving amazingly, almost a 1s faster than a 2nd place and got a confident TQ. In finals I got a bit unlucky, in A1 I made a mistake at the start and got passed by Dominykas, I caught him in a few laps, bet when I saw “the door open” and tried to overtake, he closed the gap, I had nowhere to go and went into a pipe and waited for marshal, still managed to finish 2nd. In A2 I was leading, but not much and my rear tire exploded ( divided into two parts in the middle of the tire), I was driving on 3 tires and did not had the pace to hold Dominykas in 2nd, so I finished 2nd. I took 2nd overall which is still very good position and good result. In this class my brother finished 3rd with his Xray XB4'21.

My both Xray XB4'21 and XB8e'19 were amazing to drive all day long. Big thank You for EuroRc for the support and help!
See you in the last round on October 9th !

Your shopping cart is empty

All products that are listed as in stock are in our own stock and ready to ship the next day. Exceptions to this are preorders and possible errors in logistics. All products include the finnish VAT (24%).We keep the right to change our prices.

All products are delivered by Itella (Finnish post), for EU orders priority shipments are used.

Canceling of a order

We are proud to have satisfied customers and accept returns of NEW and UNUSED items that are returned within 14days. Please be in contact with us through info@eurorc.com to recieve instructions.

When we recieve the product and it is in a reselable condition we will refund the money deducting all costs associated with the transaction.